The Irish Sugarcraft Show 2016: A Diary, by Cassie Brown

The Irish Sugarcraft Show 2016: A Diary, by Cassie Brown

Excited to be leaving on the Midday flight from Birmingham airport on Saturday, I boarded a little propeller plane bound for Dublin.
When I arrived a taxi whisked me off to the amazing Citywest Hotel- Wow. Wow. Wow! What an amazing hotel! I walked up the split staircase gazing at the chandelier, and then along so many corridors that I got lost on the way back!
Finally, I (found my way out) and arrived at The Citywest Convention Centre to be greeted by the lovely ladies from the Irish Guild who showed me round the displays and introduced me to lots of people.
There was a dedicated area to 1916 ‘Easter Rising’ a tribute in sugar. There was so many outstanding pieces from battleships, to books and guns, but the piece that took my breath away was an exquisite gold harp. The detail and beauty stopped me in my tracks for a minute, before I

had to rush on and look round the exhibition tables.
There were so many works of art on display in the competition area. Some painted, some piped and sculpted, and some with added humour that made me smile.

Flowers are always a favourite category of mine and I was not disappointed. There were some amazing displays of colour, bursting from vases and bowls and birdcages, but I was particularly fond of a pretty arrangement in white and soft pinks. The delicate colours worked so well together.
The Wedding Cakes brilliant, some were altogether on another level! The quality and detail that the competitors produce for a show never fails to impress me and this show was no different. There we some fantastic effects created with sugar, and some of the most beautiful painting I have seen.
The centrepiece though, was a huge display from the Celtic Cakers, Away With The Fairies. A

massive collaboration with artists and cake makers from all around the world taking part. A snapshot of a fairy woodland had over a hundred little fairies dotted among the leaves and animals of the wood, with the people of the trees watching over. I could have stayed there all day and not spotted all the hidden faces.
I eventually managed to get to spend some time on the Cakers World stand with the lovely Karyn Hudson, I demonstrated my airbrush to the public and a very interested and clever mini competitor!
Sunday was spent with the guild and demonstrating in the classrooms. This is the bit I enjoy the most. Chatting with the people who have taken my class and getting to know them while the work is priceless.
I have thoroughly enjoyed spending the weekend with friends old and new and I’m looking forward to Cork already!! 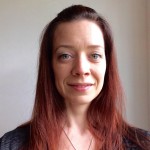 Enthusiastic and extremely talented Cake Decoration and Sugarcraft Specialist. Emma's creativity and imaginative flair is what makes Shesto demonstrations and tutorials stand out from everyone else.