Since 1992, of my own accord, I started using an Airbrush for painting plastic models and RC cars. I initially started to mess a few things up, so I looked into reading magazines on ‘How to’ use an airbrush and that’s when it got interesting. I found that a lot of people buy airbrushes but give up on them quickly as they don’t receive the help on not only the airbrush but also on how to thin paint and most importantly how to clean the airbrush. Due to this, I released many books on ‘how to’ over the years which has received a good response in the UK and Germany. The most popular work book overall is called ‘Createx’.

I started using the Aztek airbrush system since 1998 and what attracted me the most to this brand/system is how quick and simple it is to change the nozzle without having to disassemble the airbrush housing, and most excitingly the versatility of the ‘unique tip technology’ which are the 9 patented nozzle system that Is used in all of the intermediate and professional grade airbrushes including Aztek 320,470 & 480 series. Moreover, I was able to try different set ups without having to spend a lot of money on several different airbrushes.

As mentioned before, I have painted hundreds of radio controlled car body shells, plastic and resin models with Aztek, and although I have used several of the airbrushes in the range, the ones I preferred the most are the AZ4709T and AZ2203.

The AZ4709T set comes in a beautiful crafted box and has over one hundred combinations to try, currently no other airbrush in the market has this many variations. I mostly use the medium sized gravity cup, and the general purpose, black and white nozzle, depending on the work and paint. It took a little bit of trial and error to find the combination I liked for each type of medium I wanted to paint.

The AZ2203 is like having a controlled spray can that covers the larger areas. I use this for primers, base coats and big areas and RC cars.  I have found that some people have an issue using a double action airbrush and preferred the AZ3206, as it’s a single action that can be used with the nozzles and paint cups that the 470 can use.

Over the years I have demonstrated airbrushes at several modelling fairs around Germany. The biggest show is the international toy fair in Nuremburg, this is where I’ve demonstrated Aztek on behalf of ‘Shesto’, and over the years it has been very successful. I mostly exhibit how the Aztek can be used to paint on RC cars, models of all kinds and size and over the years the range has received an extremely positive response.

A few years ago I was asked to paint a naked girl on RC and I initially thought that sort of thing doesn’t belong on a RC car, and instead believed a pinup would work. So I paid a visit to my friend, the sign maker and he has a lot of CD’s with logos and designs he used with his plotter, along with a few pin ups he has for an RC.

For those that don’t know, RC cars are painted from the inside, this is called Negative Airbrushing and the general rule is mask everything except the area with the darkest colour. Then remove the masking clearing the area for the next lightest colour until white.

Now Sweet Dreams is a 1/10th as a first attempt to try the Pinup design. OOOH JA Kitty is a 1/5th and being bigger it was easier to paint. Here size did matter. Sweet Dreams was almost too small. The outline lines were very thin and were very difficult to remove. Kitty was a good size and you can see the difference.

Here you can see the finished work from behind. It’s easy to see that the masking was placed on first and painted last.

Let’s start at the beginning.

Step 1. Clean the body with warm soapy water and dry with a clean towel.

After you have washed it avoid toughing the inside. It’s best to disinfect your hands before working this is to avoid leaving any oil from your fingers this will lead to paint not holding and will leave finger prints.

Step 2. Mask the windows, bring the design in place and mask off the rest of the body except the area to be painted first.

The lettering on the side was first written on the outside of the body with a permanent marker and from inside carefully cut with a hobby knife. It is possible to have this cut with a Plotter.

Step 3. Paint several thin layers allowing time to dry between layers. This avoids creep under the masked area. When the first area has dried remove the next area to be painted and paint. Repeat this until the last area has been painted and the last thing to paint is the Pinup’s.

Step 4. The Pinup’s. Start with the outline which was painted black. I used Createx classic and Auto Air paint for both jobs. The skin colour was mixed using the Classic colours. Just like in step 3 remove the area with the darkest colour and repeat until all areas are painted. Keep in mind the light source and shadowing to give the Pinup depth. 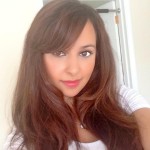 As Online Product Manager, Anisha has actively liaised with key customers to enchance the sales and marketing of Shesto Products.